How I (Almost) Became A Royal Photographer

My first experience with the British Royal Family came when I was a little boy in Cape Town, South Africa. King George VI, Queen Elizabeth and the Princesses, Elizabeth and Margaret, arrived there for a State Visit in 1947.

Part of a little pool of children from which would be drawn presenters of bouquets, I was looking forward to giving HRH Princess Margaret some Cape flowers. At the rehearsal, I was preceded by a little girl who performed admirably, presenting a fake “bouquet” to a fake “Princess,” with a gracious, elegant curtsy. Then it was my turn. I did the same, precisely the same, including the curtsy. That was my undoing, and I was summarily dismissed.

I did, however see the Royal Family drive by, including the King’s Equerry, RAF Group Captain Peter Townsend, who was to have a tragic relationship with Margaret.

I had to undergo a further disappointment when Princess Elizabeth, now Her Majesty the Queen, celebrated her 21st birthday at the Tuynhuis (Garden House), now the South African President’s residence. Less than half an hour’s drive from my parents little rented flat, I was not invited to the ball.

The story now moves about forty years later, when I’m an American citizen living in California, and the first time I was offered a “Distinction” by the Royal Photographic Society of Great Britain.

In a telephone conversation with the then General Secretary of the Society, Kenneth Warr, he asked if I could come to Bath for the occasion, and added “Her Royal Highness, the Princess Margaret, will be here, and, as she is known to like photographers and Americans, you could have the opportunity of meeting her.”

Unfortunately, I had made a commitment to accompany friends to Hawaii at that time, so I asked if he would give her a message from me. “Depends on the message,” he replied. If memory serves, these were my words: “As the weather here is generally better than in Bath, would HRH come to San Francisco to meet me here. I’ll let her know which bus to catch to reach my house; I’ll cook dinner, if she’ll agree to wash up afterward; and if the weather turns inclement, I’ll make up the sofa, so she can sleep here.” Then my thoughts turned to Hawaii.

Several weeks later, I had a call from Mr. Warr. He said, “Her Royal Highness was in such a good mood that I gave her your message, and now she’d like to meet you.”

I had to think about that for a little while. The last time she’d had a romance with a photographer, Antony Armstrong-Jones, it resulted in a marriage, and Mr. Armstrong-Jones had become Lord Snowdon. Visions of becoming Lord Shevelev had a very abbreviated turn in my imagination. But then I made the fateful decision that I didn’t want to become embroiled with the Windsors — I do have my standards.

Deep down I preferred then, as now, to be a citizen rather than a subject, though at times during the last two years, I have had serious misgivings. Nevertheless, I am happy to be an occasional visitor in the United Kingdom, where I have dear relatives and brilliant friends. Oh, but what might have been! I know that my grandchildren would have been happy with titles of nobility. My cameras remain indifferent.

Among my favorite places to visit is the town of Windsor, for its magnificent thousand-year-old castle, examples of Christopher Wren’s architecture, the long walk from the statue of George III to the gates of the Private Quarters of the castle, the nearby field of Runnymede where King John and the Barons sealed the Magna Carta in 1215, and, on one occasion, the ability to please my California palate by a bountiful salad at Uncle Sam’s in the High Street.

The last time I was at the castle, I wandered into a secluded courtyard and found one of Her Majesty’s cars there, a glossy black Daimler. As I was in the market for a new car, I walked around the Daimler to see if there might be a “For Sale” sign in one of the windows. Spotting the chauffeur nearby, I asked whether I could talk to Her Majesty about making her an offer. He was not encouraging, so I photographed the grille of the car and made a picture of myself repeated in each of the chromium panels, with parts of the castle in the background, under heavy skies.

Some twenty-five years ago I was made a Fellow of the Royal Photographic Society, and life turned out splendidly: I married an American Princess. Raised in France, she is a woman of exceptional intellect and filled with lovingkindness. Her favorite word is “civilization,” which she enhances daily, and her favorite couturier is Levi-Strauss. A portrait of her as a child, showing great promise, hangs in my study.

Back in California, I purchased a fine Japanese car. All is well. 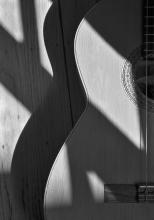 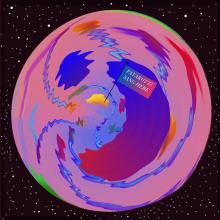