Surely You Jest, Mr. Hockney! The Click Is Not the Picture

David Hockney is a genius. To see his work in several media is to become deeply entwined in what Arthur Koestler, in his book The Act Of Creation, calls ‘the magic synthesis’- that intimate, lasting bond between an artist and the audience. It’s as profound as, for instance, the deliberate act of listening to every note, every emotion, every moment of brilliance in Haydn’s music.

Hockney has a magnificent show at the Los Angeles County Museum of Art, David Hockney: 82 Portraits and 1 Still-Life. In a recent PBS interview with Jeffrey Brown, he said that painting isn’t dead, which assured and delighted me, and that photography isn’t good enough, especially as the latter takes only ‘a snap’.

Hockney’s portrait subjects, he said, were obliged to sit for twenty hours over a period of three days, and even that may not have been enough time to complete the work. A former acquaintance of mine also referred to photographs as ‘snaps’ — which is one of several reasons that he is now a former!

As a frequent photographic portraitist, I’ve never had the work completed in a snap. It’s just never happened. If the snap refers to the shutter release, it’s an anticlimax, a stop along the way between pre-visualization and post-production, both of which entail a great deal of time and labor.

I don’t wish to get into an argument about the relative merits of painting versus photography. I love both art forms, and those who excel in either are remarkable artists. Some deeply wise person said: “I like some paintings more than most photographs, and some photographs more than most paintings.”

Nowadays, it is not at all strange to find pictures that display rare merit in combinations of both media. Mr. Hockney, a consummate artist, knows that perfectly well. I believe he’s teasing…or I must be missing something!

I do a lot of portraits, and have yet to be satisfied with the sound of a released shutter. I have portraits that I’ve been in the process of refining for days, months, sometimes years. Some not continuously, I’ll admit, but not sporadically either. Changes have come with increased aesthetic awareness, a kind of intellectual evolution, as well as consciousness of technological change, and my desire to ‘be a beginner’ as Rainer Maria Rilke would have it.

My comfort zone is the discomfort of challenge.

It has become possible to combine portions of images, some of which were made years ago, to enrich a final portrait. Here is one such example: Miriam at 100, the Melody Continues. The background is a repeated single image, made many years ago, fashioned into a combination of two images, mutually reversed in overlapping orientation and tonality to signify night and day, suggesting the passage of time, also inherent in the subject.

Among my oldest friends is Professor Christopher Johnson, a notable thinker at the California College of the Arts, and also at my dining table. I never have enough of his company, and I like to think that our conversations could go to nearly midnight if I didn’t require the sleep.

My author friend Risa Nye infuses both her literature and her readers with the infectious fullness of her presence. Her last book There Was A Fire Here: A Memoir, was published for the 25th anniversary of the 1991 East Bay Firestorm, which cost lives and consumed many homes, including hers. The image evolved from hours of thought about her personality and her experience of the fire.

My friend James Rehmus is a deeply scientifically oriented physician by training, and a deeply committed, impassioned painter.

The model for Sounds of San Francisco is closest of all, my bride of 31 years, Karine Schomer, scholar, writer, linguist, historian, musician, editor, and the center of my world.

As with Mr. Hockney’s portraits, my sitters are also close friends of long duration, and no money exchanged hands. My greatest pleasure is to portray people of my own generation and build narrative into the image.

On occasion I like to play with the concept of time, usually regarded as intrinsic and fixed in the photographic image. I’m reminded of Rembrandt’s fiction, Aristotle With The Bust of Homer. a painting done by the artist in 1653 A.D., of a 4th Century B.C. philosopher gazing at the bust of an 8th Century B.C. poet. Now, using modern digital tools, I was able to portray two young girls as approximately ten-year old companions. Yet the child on the left, my daughter Ruth Ann, is the mother of the child on the right, my granddaughter Hannah.

My ideal for commissioned portraits is contained in the sensibility of Oliver Cromwell, who, addressing Sir Peter Lely, painter of the Windsor Beauties, is reputed to have warned:

That statement is included in my piece titled Portraiture: Beyond The Face.

I’d like to start a conversation with Mr. Hockney. His age at 80 seems to spark special interest, as though it were surprising that an octogenarian can still be so productive. I hope they’re wrong. I’m 79, David, and if you are willing to converse with me and sit for a photographic portrait, I’ll fly to see you from my home in the Bay Area, and let’s see what I can do with your presence. I’m sure the ideas will come.

Raphael Shevelev is a California based fine art photographer, digital artist and writer on photography and the creative process. He is a Fellow of the Royal Photographic Society of Great Britain. He is known for the wide and experimental range of his art, and an aesthetic that emphasizes strong design, metaphor and story. His photographic images can be seen and purchased at www.raphaelshevelev.com/galleries.

Surely You Jest, Mr. Hockney! was originally published in Midcentury Modern on Medium, where people are continuing the conversation by highlighting and responding to this story. 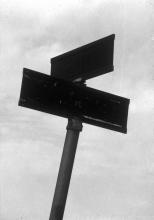 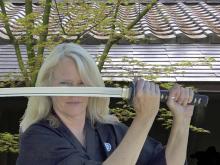 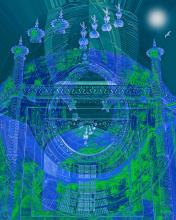 Jinns at the Taj 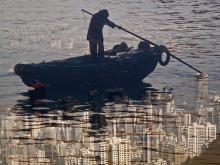